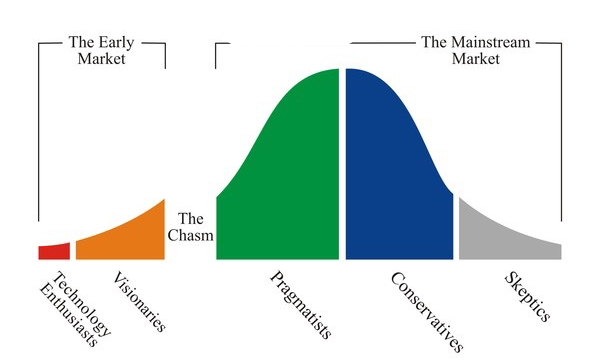 A question that we hear a lot at the moment with the fear of total loss!

Lets have a look on what has happened in 2018 and what is likely to happen in the next years with the whole Crypto and Blockchain projects. We are here not only talking about Bitcoin as the industry as a whole is making movements in the same direction.

2009 up to 2012 only freaks invested in Cryptocurrencies as it was not easy to understand and the information did not reach the public. While only a few freaks invested in Bitcoin the reality of decreasing production every 4 years resulted in a huge run for Bitcoin in 2013. The price increase from $200 to $1200 was the first big speculation and just a few months later back to the normal price of around $200. It was the first time where adoption and price where not in line and speculators managed to inflate the price way above the real value for the market.

In the time from 2014 to 2016 lots of companies started to adapt the technology of Bitcoin which is Blockchain for their own ideas. The creation of more user-friendly application and forms to buy and sell Bitcoin and other cryptocurrencies was moving fast. People, companies and some governments started to accept cryptocurrency payments. All this adaption had consequences en reaching higher values for the cryptocurrencies. Then came 2017 and another halving (Production of Bitcoin lowered by 50%, which happens every 4 years). This generated new speculation and Bitcoin reached the value of US$20’000 December 17, 2017. It was just another example on how speculation can drive the price far from the real value in the market and it came as it had to come the speculation stopped and prices where step by step reaching normality again. 2018 the chasm year! A year with prices falling pushed the whole industry to focus on the projects and adoption again. This also helped to drive the real value of Bitcoin up and started to divert real and good managed projects from scams and projects with bad management or of no use in this world. In the very hype at the end of 2017 we reached to have around 1% of world population owning cryptocurrencies. Where are we? What will be coming?

2019 – 2021 are the years where adoption of Bitcoin and the Blockchain technology need to start being part of the real world. It is the time where application and user-friendliness needs to reach a level that people do not even realize they are using it. We certainly believe that this is going to happen with the first major projects getting ready for exactly that. Until we reach this stage and the real mass adoption though it will take another 3 -7 years! So the industry is on its way to reach the real world but mass adoption still a bit away… What is going to happen on the way to get there?

There is still this halving…… In general we would say the value of Bitcoin increases with adoption and soon (in the next 5 years) we will have mass adoption and a massively higher value of Bitcoin. But there is this thing with the halving in the Bitcoin world.  May 2020 we have the next halving event Here The Link To The Countdown This event has so far always been reason for speculation and it might well be that this time we will see similar movements again. So while adoption is driving the price up their might well come a time where speculator will take over and drive the price to new all time heights just to normalize again after the halving.

So all in all we are having an interesting future ahead. Understanding the technology, the adaption, psychology and the economy as such is the key to make the right decision. Many new millionaire will be created in the next few years.

3 Comments on “What has happened to Bitcoin? A look back and ahead.”

usually posts some quite intriguing stuff like this. If youre new to this site Malvina Herculie Ardene

I was suggested this web site by my cousin. I am not sure whether this post is written by him as no one else know such detailed about my trouble. You are incredible! Thanks! Kathe Emmery Darrelle

Thanks , I’ve just been looking for information about this subject for ages and yours is the best I have came upon till now.
But, what about the bottom line? Are you certain about the supply?